My latest release, The Knight’s Scarred Maiden is all about food. Mostly because the heroine, Helissent, loves to cook and bake, and the hero, Rhain, loves to eat her food. So much so that he risks his life to stay in the village so he can eat more of it. Why is it a risk? Because he has a vengeful warlord after him, and he doesn’t want to die. But he stays, eats honey cakes and apple fritters and falls in love.

Because food is such an important aspect of the story, I gave some recipes a go. Given that this is a Medieval story, the recipes were a bit tricky. But I persevered like Rhain and Helissent, and the following recipes are my HEA in baking.

Roman Honey Cake
Here’s a sneak peek into the scene where Rhain reveals his love for Helissent’s honey cakes:
‘Thank you,’ Rhain said as she walked away. He untied one of the sacks in front of him and released a cake. It was warm and the smell of butter and honey were extravagant in the musty, almost putrid smells of the tavern. It fit perfectly in his hand and he revelled in the colour, and the springy texture of his first bite.

He knew the taste would be better out of the darkness of the tavern. For a man of his wealth and status, a man who made his money on his mercenary skills and diplomacy, he knew the art of patience. He could wait until he reached the lodging and his men, but he didn’t want to.

Cakes. Such a little pleasure to most, but to him all the more precious since a price went on his head. 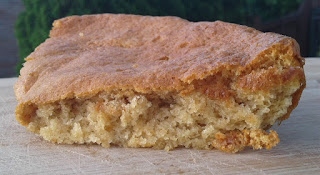 During Helissent’s time, she would have baked something like the Roman Honey Cake. And because of the cost, she would have practiced using breadcrumbs versus actual flour.

Whip eggs for at least 6 minutes, add the honey on a lower setting. Then fold in the flour. Cook at 350 for 20-30 until dark golden brown (I used a deep 8-inch quiche dish). Buttering the top makes it decadent.

Apple Fritters
In the story, there’s an intimate scene between Rhain and Helissent as Rhain is cradling her face and tracing her lips with the tip of his thumb. It’s not only the feel of Rhain that’s significant to Helissent, but that he tastes like her apple fritters.

This time when her tongue came out he pushed his thumb into its path so it wasn’t her lips she wetted or tasted, but him.
Quickly she closed her lips and he made a disappointed sound.
‘Do you know what you’re showing me?’
She only knew how she felt. Anticipation, a giddy freedom, a heavy need and want. Ingredients stirring and folding within her.
‘I’m going to kiss you. I’ve warned you.’
‘You’ve already kissed me.’
His lips curved. ‘Not as I want to; not as I’m going to. If you want to stop, you need to leave, now.’
She was incapable of moving. He smelled of warmed leather, the acrid bite of steel. But it was the lavender and sage from the gardens that enticed her more. The fact she knew he’d eaten her fried apples from the taste lingering on his thumb. 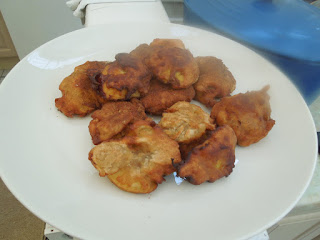 Combine warm ale and yeast. Beat together egg yolk, flour, ale and yeast to make a smooth batter. Let the mixture sit covered until risen, about 20 min. Heat the oil in a large skillet over medium-high heat. Dip apple rings into the batter. Fry until golden brown and drain. Sprinkle with sugar.

These fritters were incredibly yummy, but I must have used a high yeast ale because each one looked like the amoeba. At this point, covering them in icing sugar was essential for taste and appearance! 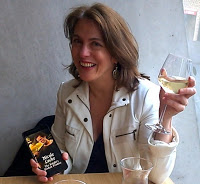 Nicole first discovered romance novels hidden in her grandmother's closet. Convinced hidden books must be better, Nicole greedily read them. It was only natural she should start writing them (but now not so secretly). If she isn't working on the next book in the Lovers and Legends historical series, she can be reached at:
Facebook     Twitter     Website     Goodreads 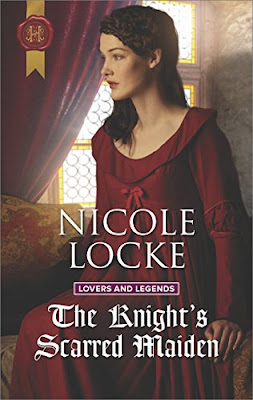 A maiden for the mercenary
Mercenary knight Rhain is living on borrowed time. With a vengeful warlord pursuing him, he has accepted his fate—though first he must get his men to safety.
When he rescues mysterious and deeply scarred Helissent from her attackers, Rhain soon wishes he wasn't marked for death. He can never be the man she deserves—his scandalous lineage alone dictates that—but Rhain can't resist the temptation to show this innocent maiden how beautiful she truly is…
Lovers and Legends A clash of Celtic passions