In Secret Baby, Second Chance, Beth cooks a lot of pasta meals (mainly because she has a young baby and she doesn’t have much time!). I like to picture her cooking one of my personal favorites, Pasta Puttanesca. 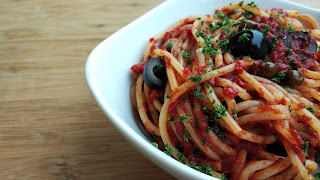 In a pan, fry the garlic in the olive oil until softened. Add the tuna, capers, olives, and chili powder. Fry gently for about 5 minutes. Add the tomatoes and oregano, and simmer gently for 10 minutes, stirring occasionally.

While the sauce is simmering, cook the pasta: when the water is at a good rolling boil, add salt, then add the pasta and bring back to the boil. cook until just al dente, i.e. tender but still just a bit firm to the bite (use the packet instructions as a rough guide). Drain well.
Add the pasta to the sauce and gently stir to coat it in the sauce. Add the parsley, season to taste and serve with the grated Parmesan.

Of course, in the book, Beth has a big clean up job to do after each meal as their daughter Lia throws pasta on the floor and feeds it to their dog, Melon! 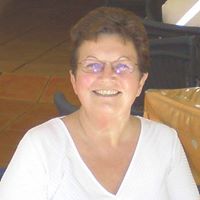 JANE GODMAN writes paranormal romance for Harlequin Nocturne and SMP Romance and thrillers for Harlequin Romantic Suspense. She also self publishes her historical and gothic stories. She has been a Romantic Times Reviewers Choice Nominee and The Romance Reviews Readers’ Choice Award Winner.
Jane worked in a variety of shops, bars, and offices before settling into a career as a teacher. She was born in Scotland and has lived in Germany, Wales, Malta, South Africa, and England. Jane still gets the urge to travel, although these days she tends to head for a Spanish beach, or a European city that is steeped in history.
When she isn’t reading or writing romance, Jane enjoys cooking and spending time with her family. She is married to a lovely man, has two grown up children and has recently discovered the joy of becoming a grandparent (to two gorgeous boys). 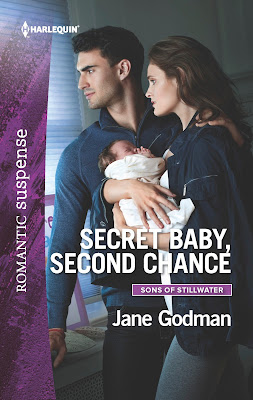 A terrorized young mother and her secret child return home, where a killer awaits…


She’s alive! Vincente Delaney has finally found his girlfriend, Beth Wade, who disappeared a year and a half ago, alive. But he’s shocked to discover someone with her: their child, a little girl he never knew about! Once upon a time, lone wolf Vincente never expected forever with Beth, but now he must put everything on the line to protect her and their family.
Beth was forced to leave Vincente to protect everything she held dear. But now the threat to her loved ones’ lives has reared its ugly head again. As danger approaches, she and Vincente must delve into her past to cast out the darkness jeopardizing their future.